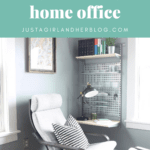 This organized and masculine home office has tons of functional storage space, a versatile sitting to standing desk, and a cozy corner to sit and relax. The perfect mix of form and function really helps to maximize productivity.

It’s done!!! For the past few weeks we’ve been talking about Donnie’s organized yet oh-so-masculine home office, and I’m delighted to say that it is finished! (And he is even more delighted because he loves it SO much!)

This room makeover was truly Donnie’s “baby.” He would ask my opinion on things here and there, but for the most part, he picked everything himself because I wanted it to be the perfect space for him!

As a little reminder, here is what his office looked like before we started:

He needed to store a bunch of stuff in a not-so-huge space, but clearly the hodge podge of furniture we had thrown together just was not working. It doesn’t look like this anymore, though! You can take the video tour or scroll through the photos below. 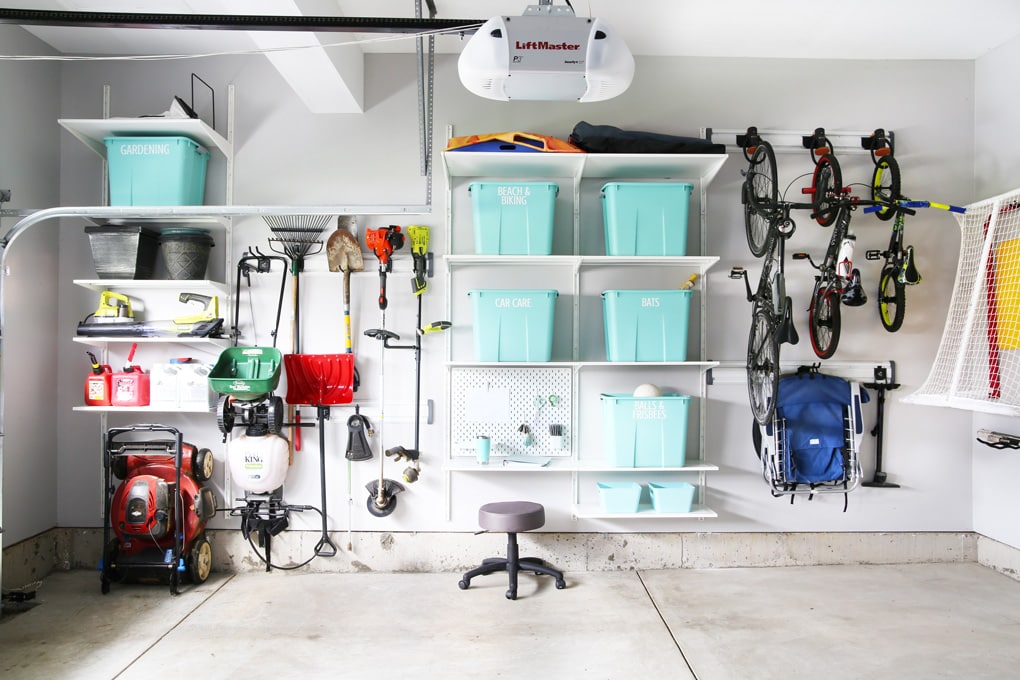 Click the button below to request your copy of the free guide, and get ready to get organized!

Donnie’s office is right off the living room, so it’s in a pretty central location in the house. It faces the back of our lot, so he has a great view and lots of windows for light. It’s not a huge space, but we knew that with the right systems in place, we could definitely make it work for him.

Right when you walk in the door of Donnie’s office, you’ll see his seating area. He had wanted a POANG chair for years but never had room for one in our old house, so he got his wish with this office!

Last week we shared a video about how we installed a wall of Elfa shelving from The Container Store on the other side of the room, but we also put a smaller Elfa setup over in this corner. Donnie loved the idea of using their utility board with a few little shelves and cups to hold things like his keys, wallet, headphones, and other items he uses often.

We also attached a larger shelf to this unit to act as his side table. He likes having things up off the ground so there’s not a lot of clutter on the floor, so this was the perfect solution.

We put one more little shelf at the top of the unit to ground it a bit and added some decorative books and a faux plant, and his cozy office corner was complete!

A smaller detail that I think made a big difference in this space was the addition of chunky craftsman style window trim. All of the windows in our house just came with a small sill and no other trim, so Donnie has slowly but surely been upgrading each one, and I think it adds so much character!

(The bamboo shades on all of the windows are these ones in the Bali Abaca color.) Donnie added matching trim around the door as well.

Another challenge we had to tackle in Donnie’s office was his desk situation. He had been using a standing desk that we built in our last house, which he liked, but since he has been doing a lot of video editing on the desktop computer, he wanted to have the option to sit as well.

He found this motorized desk from Fully (the Jarvis model) that allows him to adjust the height of the desk to sitting or standing as needed. It has presets that he has programmed to his ideal sitting and standing heights or he can move it manually to any height he wants.

That white box under the desk is an air purifier.

The up and down motion of the desk is so smooth that he doesn’t have to worry about items falling over or the computer parts being damaged. It really was the perfect solution for this space.

The biggest change to Donnie’s office space was the addition of a wall of shelves and drawers on the back wall! We showed it empty last week, but here it is all filled up and organized:

We went with Elfa’s sand colored shelves and platinum rails and brackets to give Donnie the masculine look he was going for. The combination of shelves and drawers holds all of his items perfectly, so he can store everything he needs without it looking cluttered.

The boxes on the bottom shelves are actually tool boxes, but Donnie uses them to store our video equipment because they have great dividers and allow him to keep everything neatly organized.

Mesh Drawers in the Elfa System

The mesh drawers hold a variety of things. One acts as Donnie’s “inbox” for paperwork. Another holds wires and cables. One has his office supplies, etc. He was able to use dividers within the drawers to keep each one tidy.

There are also clip on tags made specifically for these drawers, so Donnie used my label maker to add a label to each one so he could easily  tell what was inside.

The upper shelves hold alllllllllll of Donnie’s books. He has actually pared down his collection quite a bit, believe it or not. But he reads all the time, so it was important to him to have storage space for all of the books that he loves and wanted to keep physical copies of.

In addition to his book collection, Donnie also left space to house his video cameras and lenses so they are always easy to grab and some plastic bins to hold his magazines. There are even a few empty bins, so he has room to grow if he needs to!

At the recommendation of the designer at The Container Store, Donnie used ventilated shelves on the top row to hold his larger video equipment like tripods, light stands, boom mics, etc. He keeps a little stool by his desk, which makes it easy to grab this equipment when he needs it.

We were able to attach hooks from the Elfa system to the brackets holding the ventilated shelves so Donnie could hang things like his backpack on one side, and his fly fishing rod on the other.

This wall of shelving is so incredibly functional and allows Donnie to store a ton of stuff while still looking neat and uncluttered, which was the goal in the beginning!

I’ve gotten lots of questions about why we chose to use the Elfa system in this space rather than the similar IKEA ALGOT system (now called BOAXEL), which we’ve used in a bunch of the closets in both this house and our last house.

While we love ALGOT and will probably use it again in the future, it only comes in white, so Donnie liked the more masculine sand/platinum combination from Elfa better for his space.

There were also a few pieces that he wanted to use that Elfa offered and ALGOT did not, so that also played into our decision. We had never tried Elfa before and had heard great things about it, so we wanted to try it out for ourselves and see how we liked it.

A Masculine Home Office: Before and After

Donnie is absolutely loving his new office space, and is spending a lot more time in there than he was when his office was cluttered and messy! Having a space that is perfect for him allows him to focus and be more productive as well, which is always a win.

The before/after difference is pretty incredible. Let’s take a look:

(I also convinced him that he didn’t need to store his rowing machine in the middle of his office. That helped too. 🙂 )

I am so thrilled that Donnie finally has his dream office! He has more than earned it, and it is so fun for me to watch him enjoying his new space.

Want to save this post to revisit later? Be sure to pin the image below so you can find it easily!

[Psssttt… You can find ideas for organizing every single room of the house in this post!]

Have you ever organized a home office? I’d love to hear your best tips in the comments!

Thank you so much for following along! Have a great week!