Valentine boxes. They’re one of those things I almost forgot existed. I used to make them as a kid, but I’ve been out of that phase for a while. So when Con brought home a note that said he needed a Valentine’s Box for his party at school, I was sort of at a loss. “What kind of Valentine box are you supposed to bring, buddy?” I asked him.

“I want a ninja,” he replied. Of course he wanted a ninja. He couldn’t just cover a box with red paper and cut a hole in it like the other kids. That would be way too easy. “My mom is a blogger,” he was thinking, “She’ll figure it out.” Okay, maybe he wasn’t thinking that and actually just really likes ninjas. Either way, I figured if I could make a Batmobile, I could certainly make a ninja, so a ninja it was.

Here’s what I used to go about it: 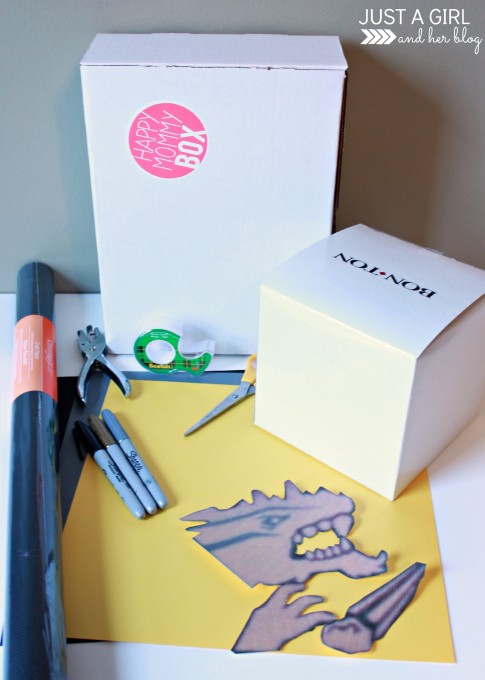 {In case you’ve never seen the little Ninjago people before, this is what we’re going for.}

I started out by wrapping both of my boxes in the black Kraft paper. No fancy technique or anything; I just wrapped them like I would a gift. 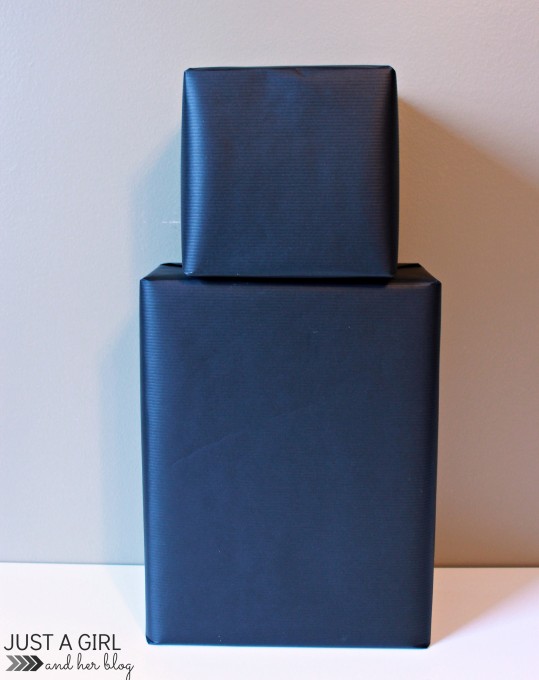 Next, I wanted to add the design to his “shirt.” I had found a picture on the web, blew it up to the size I wanted and cut it out. It was blurry, but it didn’t matter since I just wanted to trace it. I first used my gold Sharpie to outline it (1). Once I had my entire outline (2) I drew around some of the areas I knew I wanted to keep back like the eye and the lines on the face (3). Then all that was left to do was to color the rest of it in with the Sharpie, and I was in business! 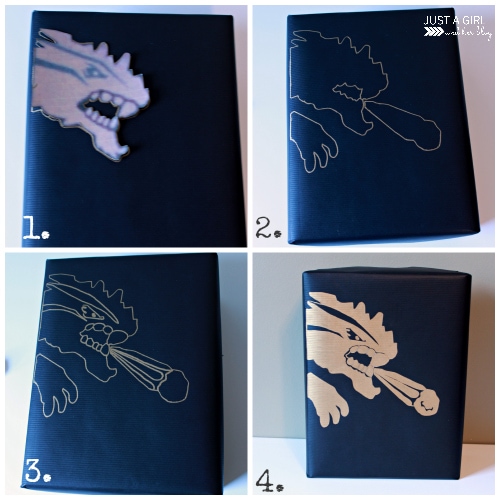 Then I added a belt. I simply cut a straight piece of gray scrapbook paper and used my black Sharpie to draw the same kinds of lines that were on my example picture. 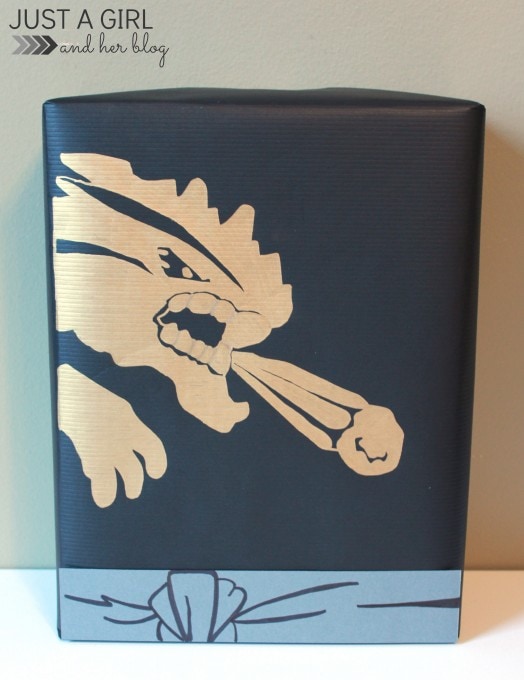 Now that I had the torso finished, I moved on to the face, which was actually just some eyes and a hood. For the eye section, I cut out a rectangular piece of yellow scrapbook paper, rounding the edges. I then used my 5/8″ circle punch to punch out two black circles and a hole punch to make some white dots. I cut two eyebrows out of black scrapbook paper, and attached everything with tape. 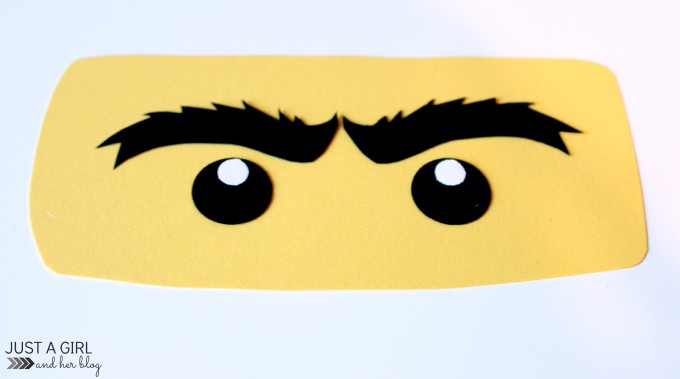 They really do look like eyes staring up at you, right? Kind of scary. 😉 Well, they needed a hood to go around them, so I traced the “head” of my ninja onto a piece of black scrapbook paper for sizing purposes  and then sketched out the hood around it. I’m no artist and even I could handle this one, so it’s a pretty easy shape to draw. 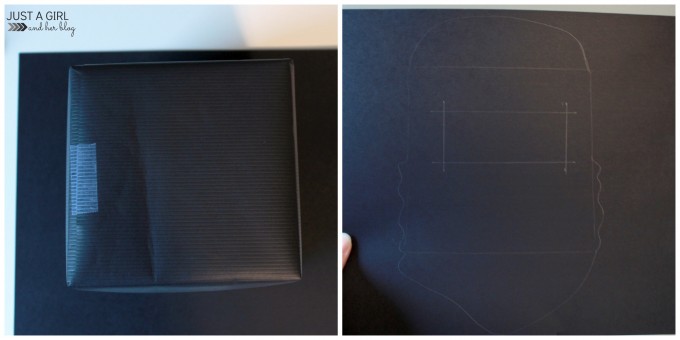 I just had to cut it out and tape the eyes behind the hole, and I had my face! I then taped it onto my smaller box, and it became the head, which I attached to the “body” with duct tape. 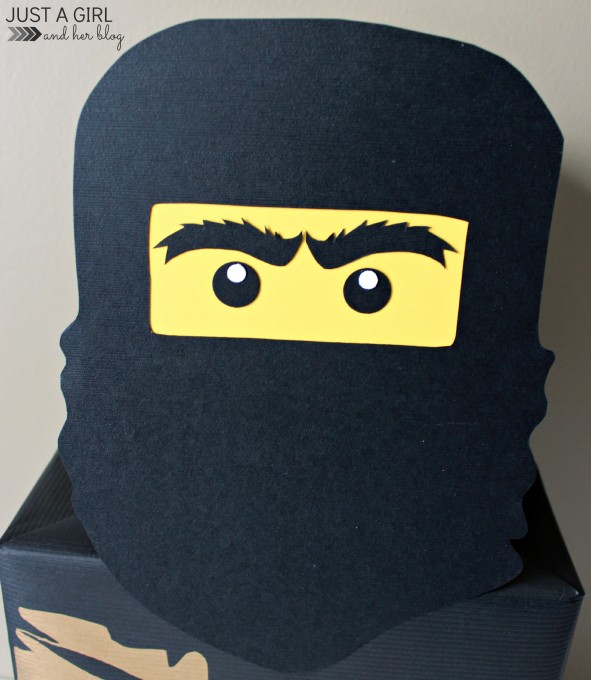 I made some arms out of black scrapbook paper… 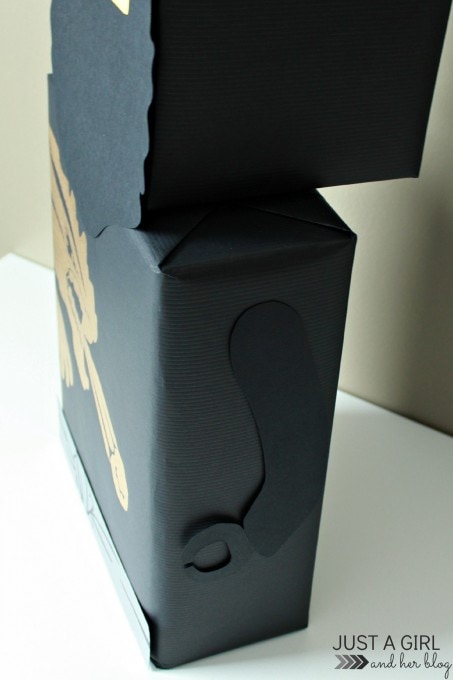 …and used my X-acto knife to cut a slot in the back to drop in Valentines. I also cut a flap to remove them, and while I was working on the back, I added the letters of Con’s name as a final touch. 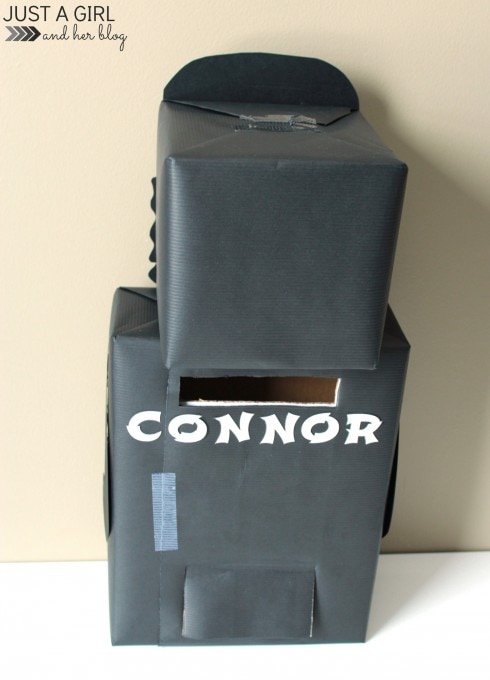 And that was that! I think my boy may just have the coolest Valentine’s box in Pre-K! 😉 Well, at least he thinks so. 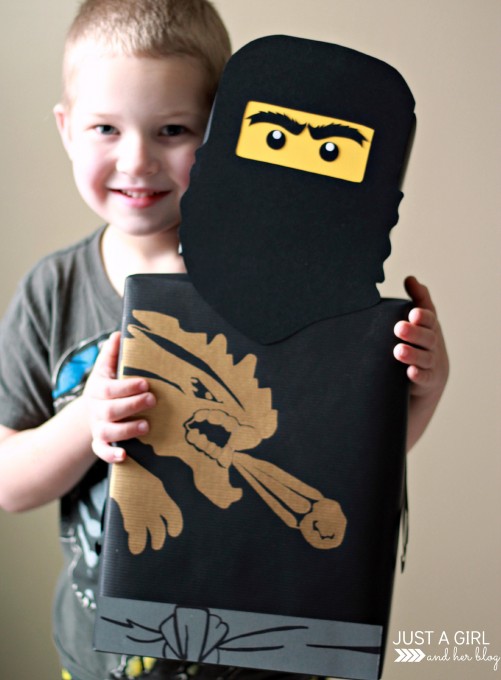 A ninja Valentine box is another thing that goes on the list of items I never thought I’d make ever in my whole life, but I have a feeling that with two crazy boys, this may not be the last wild idea they come up with!

Did you have to make a Valentine box for your child this year? What did you create?