Organizing sentimental items can be tricky, but the KonMari Method helped us complete the process quickly and easily, decluttering and tidying up our meaningful mementos!

It seems like everyone is talking about “tidying up” this year, with the release of Marie Kondo’s new Netflix show by the same name in January! I loved watching the show myself and seeing the transformations from cluttered to tidy!

I first read The Life Changing Magic of Tidying Up back in 2015, and immediately dove into the tidying process, organizing our clothes (and learning a new way of folding), clearing out our books, minimizing our paper, and decluttering just about every area of our house since then!

Admittedly, we had thrown most of our sentimental items into boxes and bins and left them in the basement where they were out of the way, and we didn’t really think about them most of the time. When I decided to take on the project of organizing our entire basement in the month of January, sentimental items were one of the first things I began to sort through.

When we started, Donnie was actually the big winner, with several boxes of items that he needed to go through.

Most of the boys’ and my items were in this one (very dusty) bin, which was packed to the brim with stuff!

Donnie and I each took it in turns to make a big pile of all of our sentimental items as Marie suggests, and then went through things one by one, determining what was meaningful enough to us to keep (aka what “sparks joy”) and what could be discarded. It was kind of a fun walk down memory lane!

Make the KonMari process quicker and easier with our free printable Tidying Checklist! Snag it below! 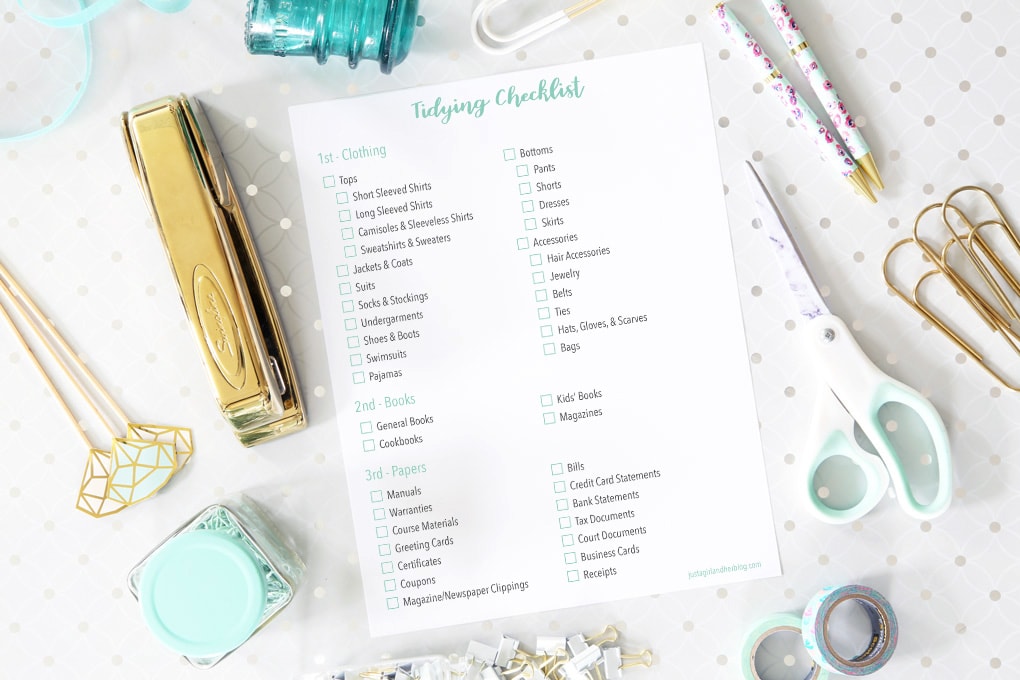 Get Your Tidying Checklist!

Speed up your tidying process and don’t miss a thing with our detailed, easy-to-use checklist!

Decluttering can be tough in and of itself, but when it comes to mementos that have a special meaning behind them, it can be especially difficult! There were a few simple things I figured out during the process that helped me choose what to keep and what to discard.

I Kept One Item that Represented a Collection of Items

I had a few collections of items that I kept because either the person who gave them to me was meaningful or the collection itself had meaning to me at one time. For example, my late grandmother had given me a bunch of angels, which were meaningful because they were reminders of her.

But they stayed in a box, packed away. I never looked at them. They weren’t really my style to display. Many of them were broken or worn or dated looking. So rather than keep the entire collection just to keep them, I chose one angel that was really special to represent that connection with her, and I let go of the rest.

A side effect that I didn’t really expect was that now that one angel seems even more special because it is just a single representation of something I cherish, whereas the collection was just too much to deal with so I kept it packed away.

Albums Are a Great Way to Represent a Period of Time

In a similar way to what I talked about with collections, I found myself appreciating scrapbooks and albums like baby books because they often took the best, most memorable photos and items from a period of time and arranged them in a logical way.

Rather than having 1000 photos from my high school years to go through, for example, I simply kept a scrapbook that my mom had put together for my graduation that accurately represented the most important moments of that period of my life, and I could discard most other things from that time because they already were accounted for in the album.

These are most of the sentimental items I ended up keeping, including baby books, albums from high school and college, and our wedding album.

I did have a #momfail moment as I was going through our mementos, realizing that I had created two baby books for Connor (age 10) when he was an infant and Caleb (age 7), didn’t even have one! (Is that the typical second child treatment or what?! ?) So we ended up printing a selection of his baby pictures and putting them in an album so he would have something to represent the first few years of his life!

[Side note– I realized that there was also a significant shift between the time I had Connor and when I had Caleb. Instagram didn’t exist when Connor was born, but by the time Caleb arrived it did, making it easier to keep a digital record of his milestones. So I’m blaming that for at least part of the reason he didn’t have a physical baby book until now, lol!]

It’s Helpful to Set a Limit to Shoot For

Whenever we decided to take on the project of decluttering our sentimental items, I went to Target and bought four sturdy plastic bins, one for each member of our family. As we were decluttering, I kept in mind that ideally, all of the mementos we wanted to keep would be limited to the one bin per person. (I knew that since our boys are young, their bins would have extra room in them to add items as they get older.)

These bins are from Target, but these exact ones aren’t currently on their website. These are the same size. I made the labels with my Silhouette cutting machine + adhesive vinyl. The font I used is called Crushed.

At the end of the decluttering process, both Donnie and I kept all of the items that were truly meaningful to us, and we each actually have room to spare in our bins! Having the bin gave us boundaries to shoot for as we were thinking about how much stuff to keep, and it helped us more accurately evaluate what was truly important.

When our boys get older and have homes of their own, I will be able to hand them one well-curated bin full of meaningful items that represent the different phases of their childhood, rather than boxes and boxes of random stuff they’ll have to go through and just throw away later.

What sentimental items did we keep?

When I shared a sneak peek of our process in my Instagram stories, I got a lot of questions asking what types of things we kept, so here is a quick look into each of our bins:

I used smaller bins within our larger bin to help corral small items and keep them tidy. Donnie did a stint in federal law enforcement right after we were married, so one of his smaller bins holds items from that time. The other small bin is a mixture of a few school papers, childhood clothing items, and fishing items from his grandfather.

Donnie also kept some yearbooks, a Wheaties box from when the Penguins won the Stanley Cup in the early 90s (which is extra special now because our son Connor is obsessed with hockey!), and his medal and number from the Harrisburg marathon.

Admittedly, my bin had the most stuff! But in my defense, most of my items were albums that take up a lot of space! 🙂 I kept a quilt that my grandmother made me, and this adorable Scrabble board gift from Donnie from our first year dating anniversary!

Along with the albums I mentioned earlier, I also kept yearbooks, my “big sister” t-shirt from when I met my sister for the first time, the Bible that my grandmother carried at her wedding, and two diaries that she kept that documented each time I visited her.

For Connor (age 10), we kept some photos that hold meaning for us, along with his baby books, some baby clothing, and a few awards he’s gotten.

We also have an invitation from his dedication, tickets from one of his first Penguins games, some newspaper clippings where he’s mentioned, and a few school notebooks and special art projects.

For Caleb (age 7), we kept his newly created baby book 😉 , some ultrasound photos and videos, and a few clothing items.

He also has a few special projects and notebooks, as well as a yearbook and his dedication invite. We will, of course, continue to add to the boys’ bins as they get older.

Note: I have a separate process for the boys’ school paperwork, which you can read about in this post.

It’s Not “One Size Fits All”

Ultimately, we’re all going to have a different comfort level when it comes to the number of items we want to keep– particularly sentimental items– and that’s okay.

People have various levels of connection to their belongings. The one thing I noticed over and over on Marie’s show, Tidying Up, was that different people struggled with getting rid of different things.

For one person, clothing may have been easy to go through but paperwork was difficult. For another person, decluttering the kitchen may be a breeze, but a shoe collection may hold sentimental value for them, so those were harder to work through and get rid of.

No one has the exact same experiences, connection, family, needs, or likes and dislikes. What we choose to keep works for us, and what you choose may be more or less, and that’s okay too. There’s no one “correct” amount of “stuff,” but there is usually a place that you and the other members of your household can find that is the right amount of stuff for you.

If this post was helpful, be sure to pin the image below so you can reference it easily as you tidy up your own sentimental items!

More Posts About the KonMari Method

[Psssttt… Get 100 brilliant ideas for organizing every room of the house here!]

Do you have any tips and tricks for decluttering sentimental items? I’d love to hear them in the comments below!