A huge thanks to HomeRight for sponsoring this post. My favorable opinion of amazing machines that keep me sane is 100% my own. For more information, see my disclosures here.

Y’all, this post should really be titled “The Machine that Saved My Sanity,” because I was close to going off the deep end on this one. If you’ve been reading over the past few weeks, you know that I recently gave the Cs’ bathroom a little refresh. It’s a small room and was a pretty blank canvas, so I didn’t really anticipate any major problems. It started out like this: 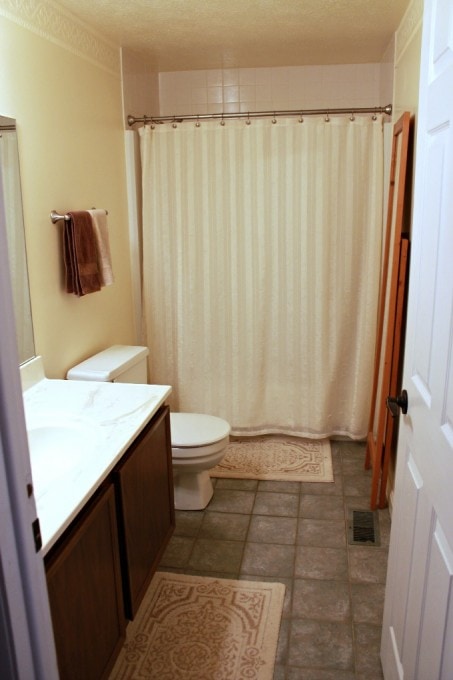 Do you see what’s there at the top of the walls, trying to blend in so no one will notice? That would be a wallpaper border– a painted-over wallpaper border to be exact. (Seriously, you really needed to paint over the wallpaper? Ugh!) 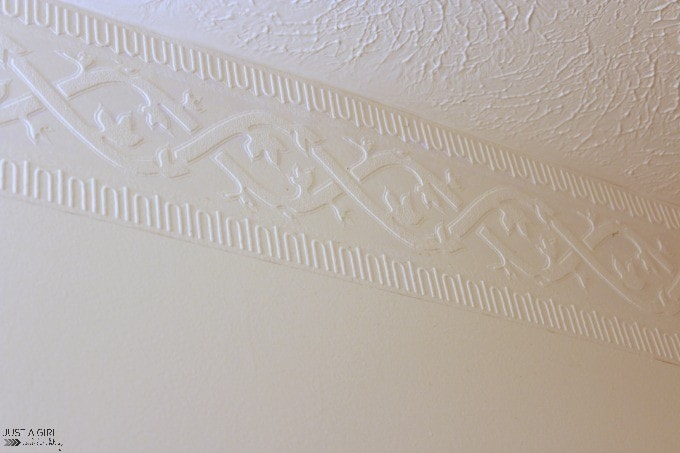 Not the most hideous wallpaper I’ve ever seen, but not exactly my style, so I thought I would just take a few minutes to pull it down before I painted the walls. HA. Oh, how naive I was!

I had only removed a wallpaper border once before and it was one that had been up for just four months. To remove it, I took my iron, shot a few puffs of steam at it, and used a little painting tool to scrape it away. It came off super easily, so I thought I could just use the same technique on this one. I tried it, and after 45 minutes, this is what I had accomplished: 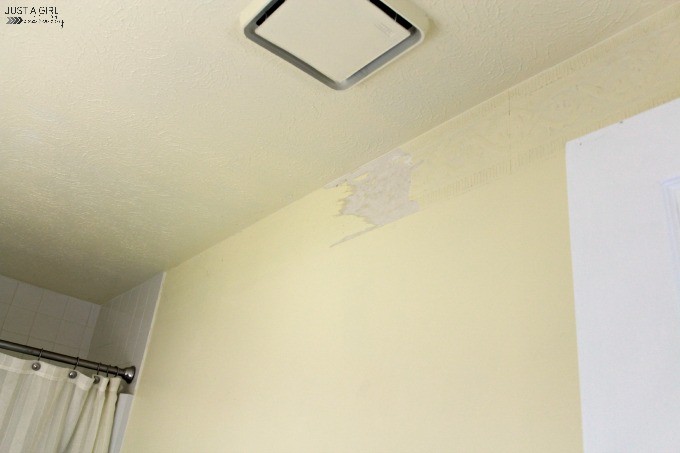 One-third of one wall. In 45 minutes. At this point I was getting frustrated, so I did what any good DIY-er would do in this situation… I put out a desperate plea on Instagram! 🙂 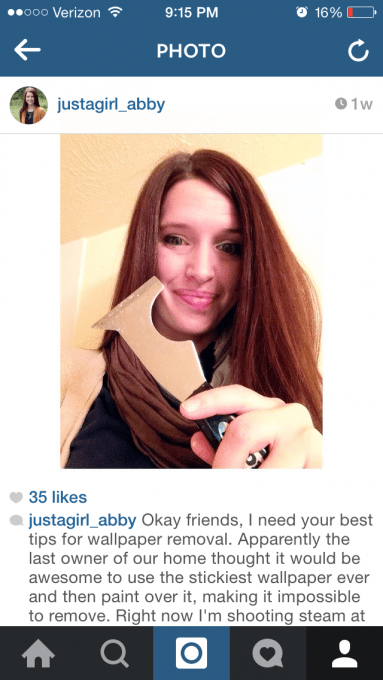 You all delivered with advice too– so many great tips! Among the responses were HomeRight (who I’ve worked with in the past on our stairwell makeover and Donnie’s dresser transformation) and Jacque from The DIY Village saying I *had* to try HomeRight’s SteamMachine because it would have the wallpaper down in no time. Now I’ll be honest. After the fight I had just had with the wallpaper border myself, I wasn’t sure that any machine or tool was ever going to get this thing down, but I read Jacque’s wallpaper removal post and it seemed promising, so I decided to give it a try.

Since I was on a little bit of a time crunch, my friends at HomeRight were kind enough to rush off a SteamMachine right away {Hey, I was having a wallpaper emergency, people! 😉 }, and I was so delighted when the postman delivered this: 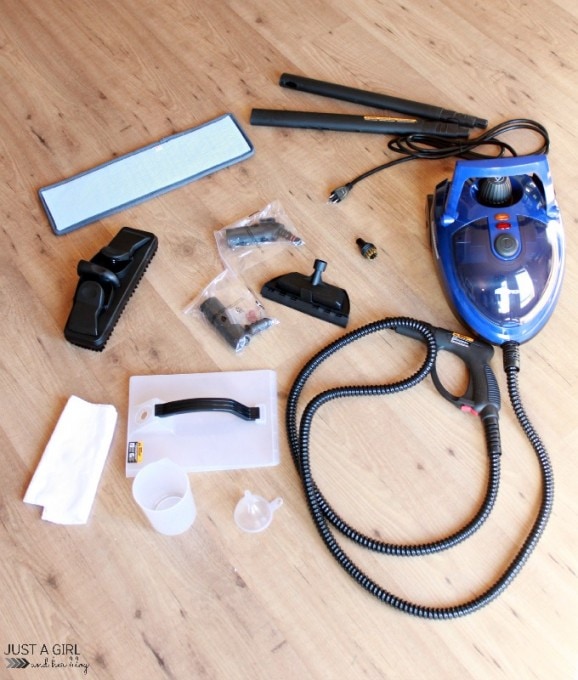 Isn’t it pretty? Of course my mind immediately started going a mile a minute thinking about everything I could do with all of those attachments: steam clean the floors, clean tile and grout, sanitize everything… but first on to the wallpaper! 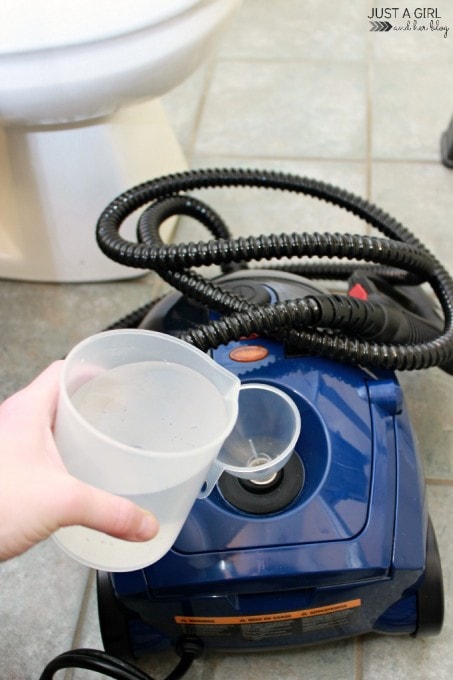 I filled the SteamMachine with water using the handy dandy pouring cup and funnel provided, put the cap back on, and let it heat up for 8-ish minutes until it was ready to go. 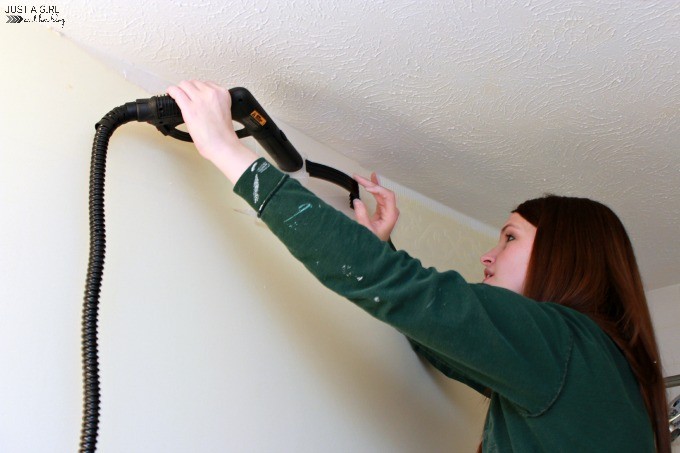 To use the SteamMachine, I would hold the steam plate up to the wallpaper for about 15 seconds. {Note: Since it is steam, there is some water that will drip down the wall due to the condensation, so if you are working above carpet or other area that you do not want to get wet, be sure to cover it up accordingly.} This would allow me remove the top layer of wallpaper in one large chunk. Then I would hold the steam plate up to the remaining wallpaper backing for 5-10 seconds, and that would remove easily as well. I could hardly believe it. After spending 45 minutes without the SteamMachine removing about three feet of wallpaper, it only took me another 45 minutes to complete the whole rest of the bathroom. Amazing. 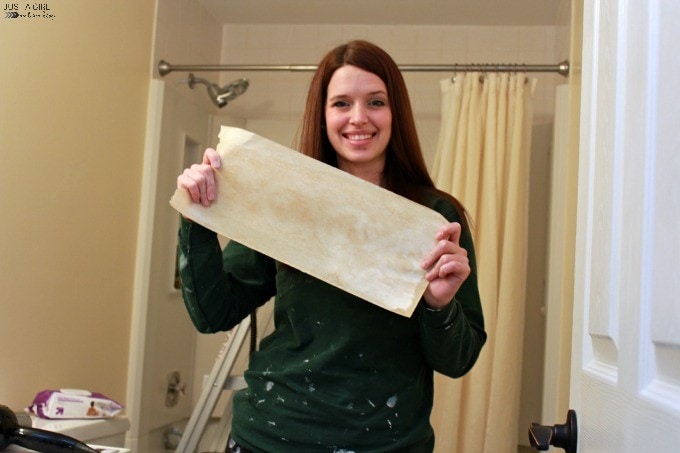 Me, completely giddy that the wallpaper was in my hands rather than on the wall. Photo by my six-year-old who was oh-so-proud of himself for taking it. 🙂

Lesson learned? If you’re going to do a job, make sure you have the right tools! The HomeRight SteamMachine saved me so much time and so much hassle. I’m thrilled with how easy it made removing the wallpaper, and my family is thrilled that I was able to keep my sanity. 😀

Once the wallpaper was removed, we were able to move onto painting and adding pretty accessories and eventually ended up with this: 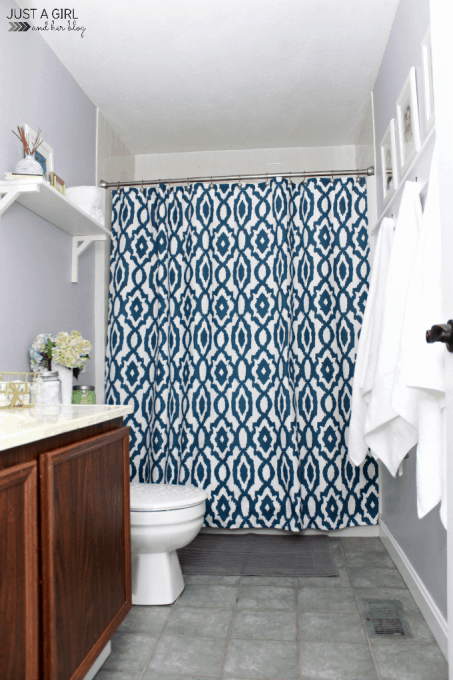 Woohoo! So much better, right?! I had committed to doing this makeover in a week, and for a little while, I wasn’t sure it was going to happen! Thankfully, it all worked out and we are all so excited about the updated space. That was the last shred of wallpaper in our house, so hopefully I won’t be removing any more for a while, but if I need to, I know it will be easy-peasy next time around!

Have you ever tried to remove wallpaper that didn’t want to budge? What techniques worked for you?

A huge thanks to HomeRight for sponsoring this post. My favorable opinion of amazing machines that keep me sane is 100% my own. For more information, see my disclosures here.