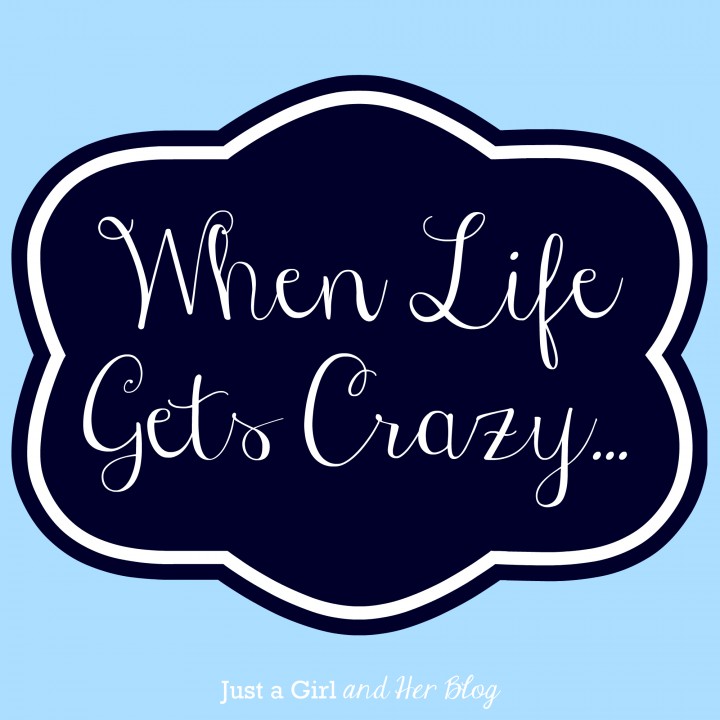 I don’t know about you, but the older I get, the more I realize how many things I take for granted. It is so easy to get caught up in our own lives and daily routine–playdates, appointments, lessons, preschool, etc., etc., etc. But every once in a while something happens that totally rips us out of our routine and makes us realize just how blessed we are and how precious life really is. That was definitely the case for us this week.

I was playing outside with the C’s on Sunday night. We were starting to gather up our stuff and get ready to go in when I heard a clunk, followed by a cry. My sweet little baby C {Caleb} had tripped over his shoes and fallen, hitting his head on the hard pavement of the driveway. I immediately scooped him up in my arms. A bump developed quickly on his forehead, but after a minute or two he stopped crying and seemed to be okay. We went inside, put ice on his bump, and snuggled on the couch for a little bit. 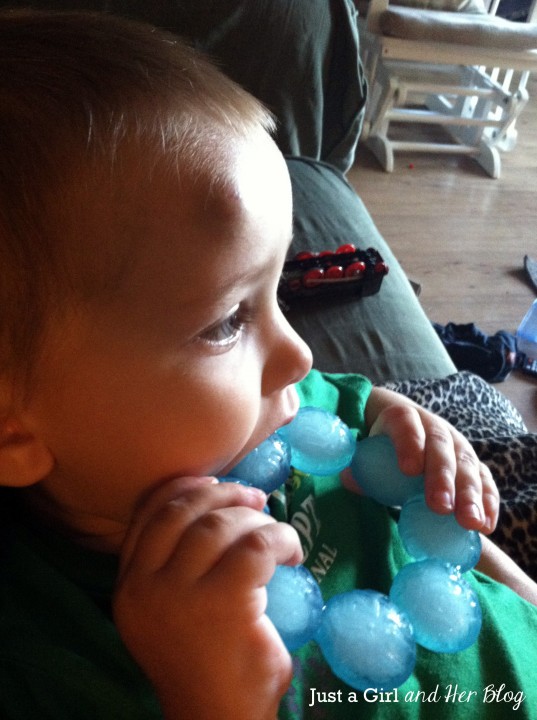 Just when we were getting ready to go up for bed, about an hour and a half after his initial fall, I heard baby C crying turned around to see that my little man had thrown up all over. Alarm bells immediately went off in my head… was this a concussion? I called hubby first and then my dad who has had several concussions from his old football-playing days. We decided that I should take little Caleb to the ER.

Aside from the fact that I was afraid that my baby had a brain injury, the ride to the hospital must’ve been pretty comical. Since I had always heard that you’re not supposed to fall asleep when you have a concussion {which apparently they’re not as worried about anymore, I would later find out} I was doing everything in my power to keep him awake–singing, asking him ridiculous questions, counting in various languages, calling out silly rhymes–you name it, I probably tried it. At least it worked–he was still awake when we got to the ER.

I had taken my boy to the hospital closest to our house, but after the doctor checked him out and learned that he had vomited several times at this point, he made the decision to transport us by ambulance downtown to Children’s Hospital. Before we could go, though, they had to get him hooked up to an IV, which of course meant sticking him with a needle. This was by far the worst part of the entire experience. Caleb was screaming and kicking and calling for me and yelling, “HOME!! HOME!!” I felt so helpless. How do you explain to an almost-two-year-old that the thing that is hurting them is what will help them in the long run? To make matters worse, they missed the vein in each hand and eventually were successful in his arm, so he had to go through the whole horrible process three times, all while wearing an uncomfortable neck brace that didn’t fit him correctly. He was miserable to say the least.

We were finally sent off to Children’s in the ambulance, and when we got there I began to feel like I was in an episode of Grey’s Anatomy. Since Caleb had a head injury, he was considered a “trauma.” We were wheeled on the gurney {They had had me hold him during the ambulance ride, so I was the one actually strapped down to the stretcher.} into one of the ER rooms and were immediately swarmed by doctors and nurses. They lifted us {yes, both of us} onto the hospital bed using the sheet and immediately started checking out my little boy. Scans and x-rays were ordered. It felt like we visited every part of the hospital. The nurses in every area we visited gave him a new toys and stickers, so he developed quite the collection. 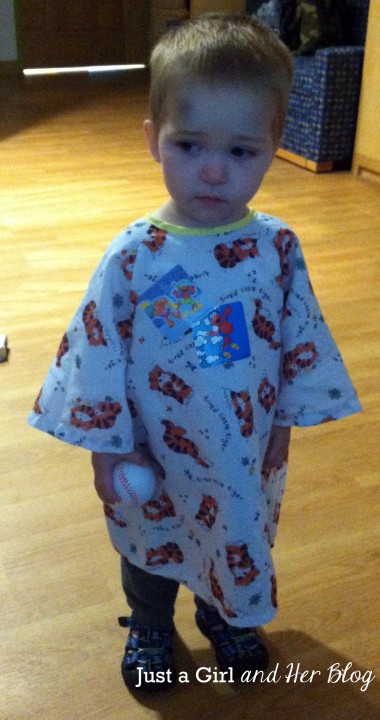 At this point it was almost 2 am. He was exhausted. I was exhausted, and I was still worried sick about my sweet little guy. Fortunately, they were able to get the results of his testing pretty quickly and determined that he had no bleeding on the brain or neck injuries. Praise the Lord. I was so relieved.

They wanted to keep baby C overnight for observation, so we were eventually taken to a room and were able to get small snippets of sleep between alarms going off on monitors, nurses coming in to take his vitals, doctors visiting to give updates, etc. Hubby and Connor arrived in the morning and we spent the next few hours as a family until we were finally released. Whew. 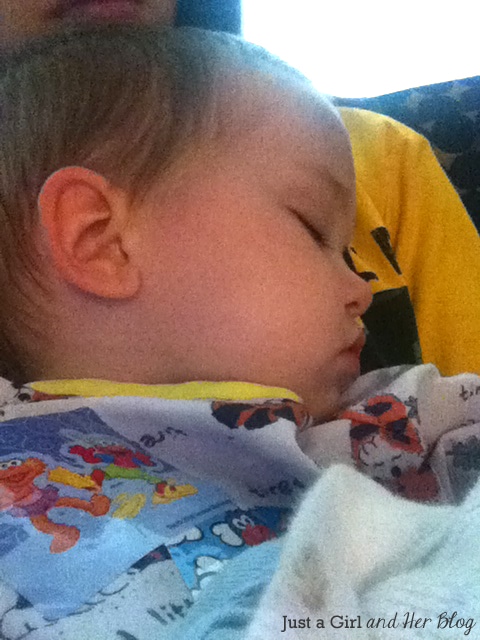 We spent less than 24 hours in the hospital and I felt like our whole world was turned upside down. The emotional roller coaster of wondering if my baby was going to be okay coupled with total lack of sleep and being outside of our normal environment was completely draining in every sense of the word, not to mention our house was a wreck, I had amassed a bazillion emails, and I felt totally behind on everything. After one day. And he’s fine now. 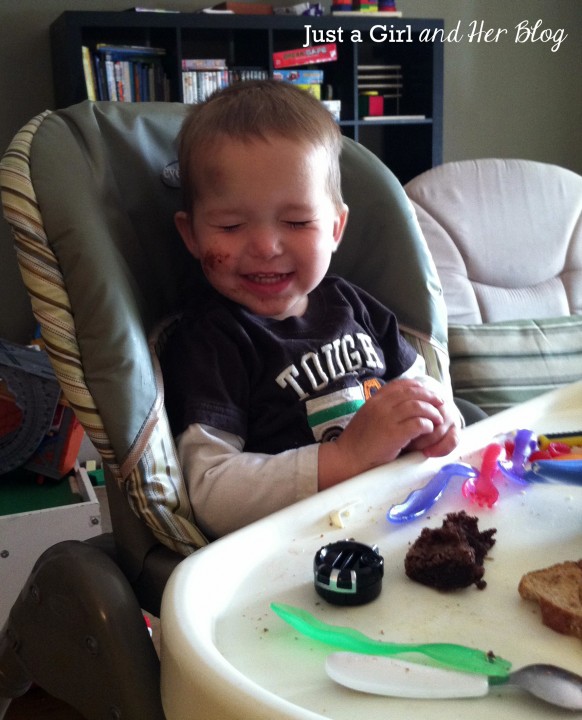 This wasn’t Caleb’s first stay at Children’s, unfortunately. When he was one month old, he contracted meningitis and was in the hospital on antibiotics for a week. Both times we spent there were scary and difficult, but both times we walked out with a healthy baby who would suffer no long-term effects. Both times I walked through the hospital and saw families whose reality this was day in and day out. Their children didn’t get to leave after one day. They were there for the long haul. Their worlds weren’t just put on hold for a day or a week; they were changed indefinitely.

Experiences like this bring me to my knees before God. I’m so incredibly thankful that my boy is healthy. I cry out for healing for those children who aren’t and for peace and comfort for the families that take care of them. My heart breaks thinking about the fact that some of them may never get to go home and live long, healthy lives. That’s tough stuff, and it often doesn’t make sense.

I do know this, though: I serve a BIG God, and He is always in control–even when it’s hard, even when it’s confusing, even when nothing seems to make sense. That doesn’t mean that the hard stuff won’t hurt. Oh boy, does it ever hurt sometimes. But the only way I know to live life without letting the difficult things send me into the pit of despair is by having hope in the fact that life in this world isn’t it. Because Jesus died on the cross, my sins are forgiven–taken away–and I will be able to spend eternity in Heaven with Him. I can’t even begin to imagine what that will be like, but the Bible promises that “He will wipe every tear from their eyes. There will be no more death or mourning or crying or pain, for the old order of things has passed away.” {Revelation 21:4} I so look forward to that day, but until then, I’m going to be sure to thank God and praise Him for everything He has blessed me with and try desperately not to take it for granted.