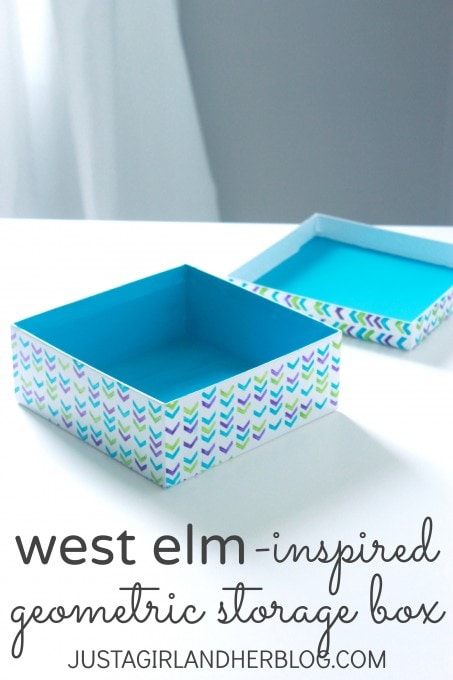 Friends! I feel like it has been FOREVER! Usually I post on Wednesdays, but I didn’t yesterday. I’m posting today instead just to throw you for a loop. 🙂 I have a fun and oh-so-simple project to share with you today. A few weeks ago, the lovely Miss Jen at I Heart Organizing issued a high-low challenge. She said,

Select one or more organizing/storage items which are either sitting in your virtual shopping cart or have been pinned on Pinterest and set out to recreate that item with a little DIY’ing and creativity.

Well that sounded pretty fun to me, so I said, “Challenge accepted!!” I have had my eye on these adorable geometric jewelry boxes/storage boxes at West Elm for a little while now, so I thought they would be perfect for this challenge:

I mean, are they not the cutest things ever? But this thrifty girl was not about to pay $63 for a little box, so I decided that I was going to DIY my own, and you really should be proud– as an English major, this is as close to geometry as I get! 😉 Here’s what I used to make my DIY version: 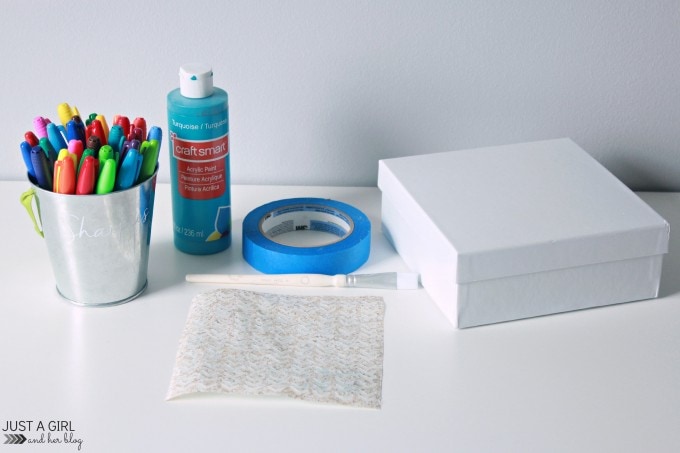 When I purchased the white box, I didn’t realize that it had a super glossy finish {it was shrink-wrapped}. To prevent my markers from smearing, I gave the box a few light coats of white spray primer to “rough it up” a little bit.

This project is SO easy, friends! I simply pressed my stencil on to the box (1), then used my Sharpies to color in the herringbone pattern one color at a time– blue first (2), then green (3), then purple (4). Then I just pulled up my stencil, moved it over, and repeated the process until I had covered the whole box. 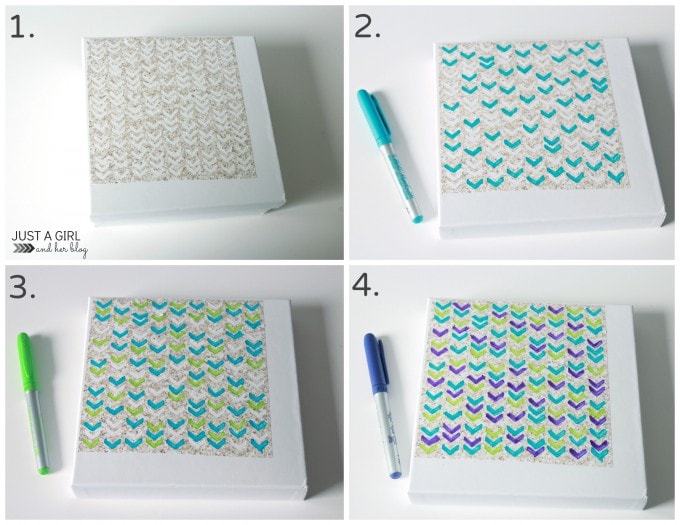 I have discovered that the easiest way to line up the next row of stenciling is to overlap the first row of the stencil with the last row of stencils I made. That way I know they’ll be uniform all the way around. 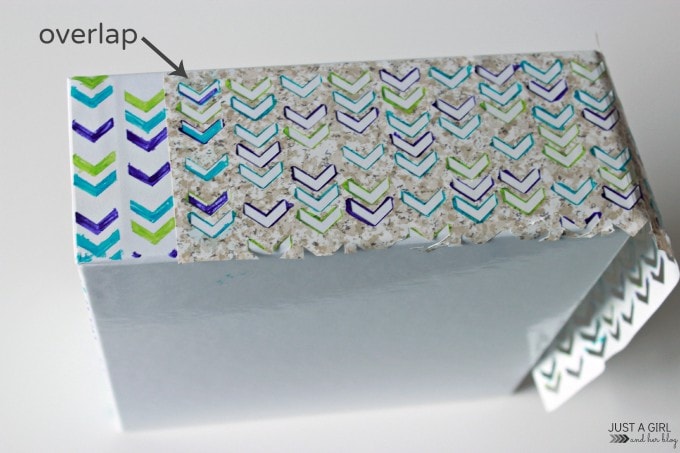 The stenciling was a little time-intensive, but it was one of those things where you could pop in your favorite movie, snuggle up with your Sharpies, and not even realize you just spent an hour or two coloring in little herringbone shapes, so it really wasn’t bad at all. 🙂 After I had finished up my stenciling, I could have called it quits. My box was looking pretty cute, and I was happy with how the stencil turned out. 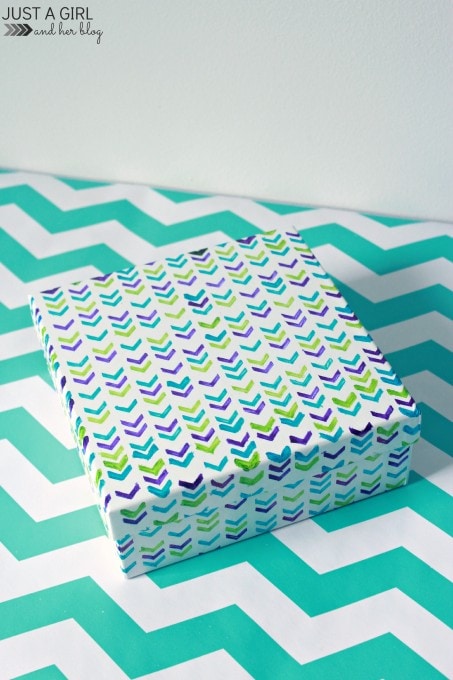 I thought it would be fun, though, to have a bright pop of color on the inside of the box, so squirted some paint inside, painted it up, and ended up with this: 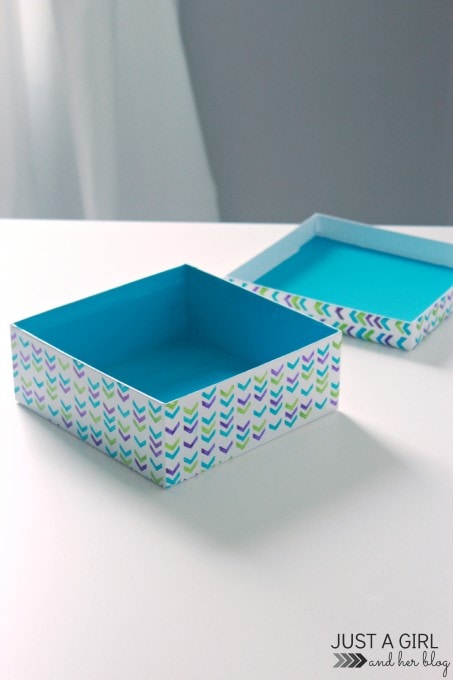 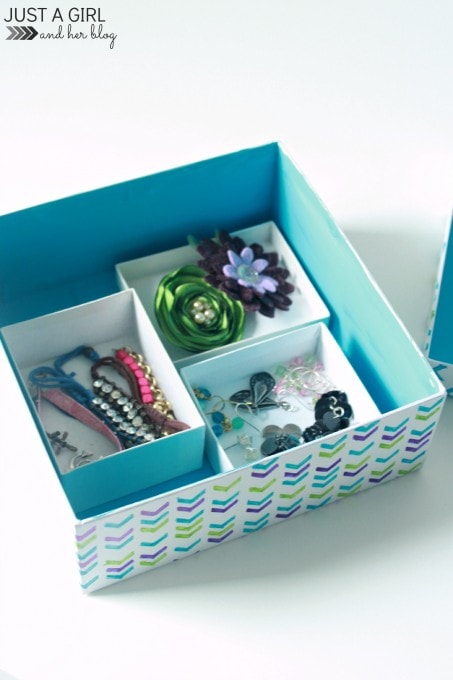 …or I might put it on display somewhere and use it to organize some other small items. Come to think of it, it does sort of match my new #fabulouslyfemininehomeoffice. 😉 But of course my favorite part about it is the price tag. Mine cost a grand total of $3 as compared to the $63 West Elm version. I’ll take it! 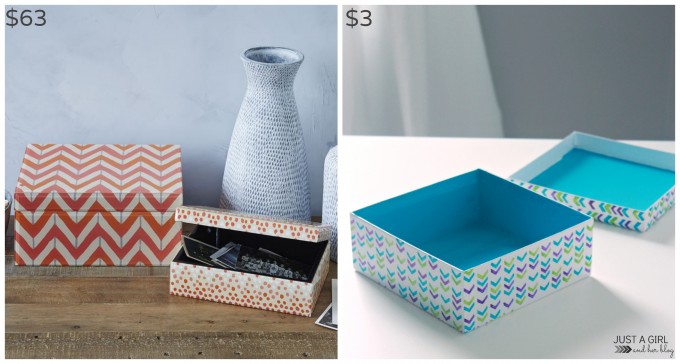 Have you done any high/low projects lately?

Pssssstttt… Right now I’m offering a FREE PDF to all of my newsletter subscribers with detailed screenshots and instructions on how to create your own adorable organizational printables! Hurry and snag it up here! {PDF is sent within an hour of subscribing. 🙂 }

I link up at Inspire Me Please,  I Heart Nap Time, and these fun parties!