Welcome to my first “Operation: Declutteration” post! If you missed the intro last week, basically I’m going to be tackling a different space each Friday for the next several weeks, with the goal being to declutter, reorganize, and fix any systems that just aren’t working anymore.

This week I tackled the Cs’ room. I was a little bit of an overachiever and also decided to refresh and repaint this room while I was at it (something that has been on my “to-do” list for a while now), but I won’t be repainting every week, for sure! 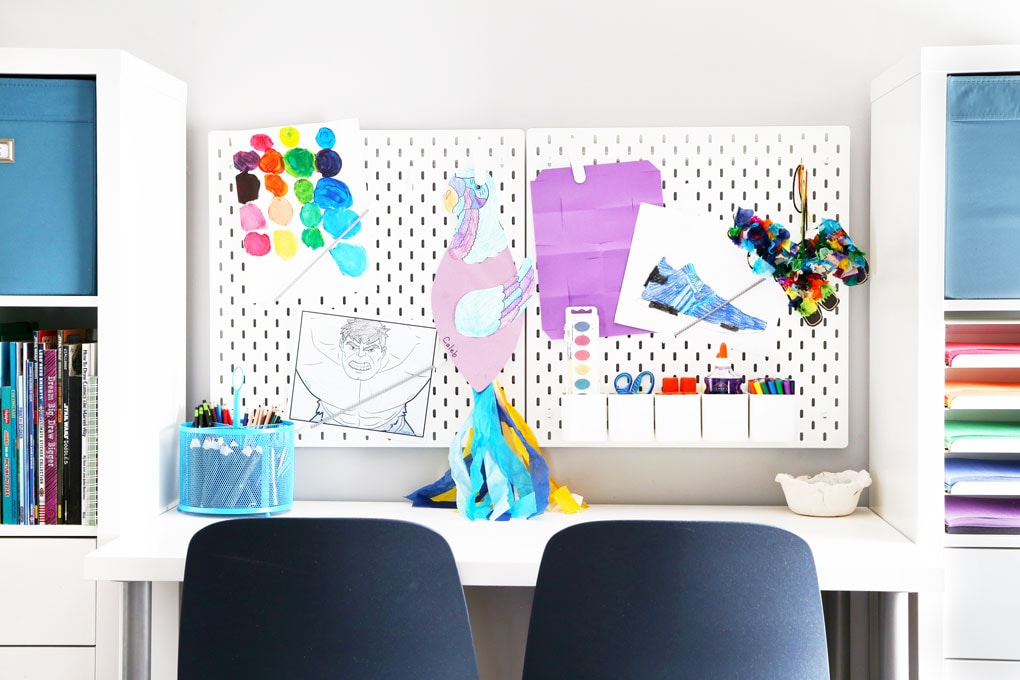 Grab our free guide, 10 Simple Ways to Get the Whole Family on Board with Organization!

Learn practical tips and strategies that will help get the whole family involved in the organization process– without having to constantly nag!

I really wanted to focus on the problem areas, the spots where clutter was constant even when the room was picked up. So what you’re seeing in these “before” pictures is what the room would look like if the Cs and I straightened it, putting everything in its “normal” spot.

…until you look underneath it. These are actually toys I brought up at Christmas time to help make room for our tree, and they never made their way back downstairs again. Since the Cs haven’t played with them or even wondered where they were for the past 3 months, I think it’s safe to say that most of them aren’t their favorites and could probably find better homes somewhere else.

Clearly this corner was a bit more of an obvious problem. Toys stacked everywhere! The Cs insisted on keeping the banners from their birthday parties and hanging them up in the room, causing even more clutter, and the ladder shelf became a “catchall” for anything and everything.

Friends, I found so many crazy things in this over-stuffed closet that you don’t want to know about them all. The biggest problem was that I had stuffed my wedding dress in there, and it took up the majority of the space and hid all of the hand-me-downs that I had so painstakingly organized and put away. See that Diaper Genie right there? I haven’t had any kids in diapers in, oh, 8 months or so, so it’s doing us a whole lot of good just sitting there taking up space. 😉 I had thought that I had brought out all of baby C’s 3T clothes. Nope. There were two bins hiding behind the wedding dress, so he pretty much got a whole new wardrobe this week. Mess, mess, mess!

Their little art corner wasn’t horrible, but the magazine file was over-stuffed with old magazines and coloring books that didn’t even have any clean pages left in them. The little cups I had been using to hold the Cs’ markers and crayons had started to overflow, but instead of just weeding out the broken crayons and dried up markers, I got bigger containers to hold all of the junk that wasn’t even useful to them. How much sense does that make? Zero.

Can you tell I was pretty fed up with how cluttered their room had gotten? There were so many areas that needed help that I started with my favorite tactic… I removed everything! Since I knew I wanted to paint, it had to be done anyway, but taking all of the “stuff” out of a space is always helpful to me because it allows me to start with a blank canvas.

A blank canvas causes me to be more choosy. I don’t put anything back onto it unless it’s absolutely necessary. While the room was being painted, I moved everything into my bedroom to sort it out. I threw away a lot of things that were missing pieces, broken, or stained. I kept garbage bags handy to store items that would be donated. There were also some nicer toys that the Cs weren’t using anymore, so I organized them into groups, and we’ll probably end up selling them on Craigslist or somewhere in the near future.

So once I had everything all sorted out and had painted the room, I started putting things back into place. With every piece that I took back into the room I tried to ask myself, “Is this something the Cs need? Do they still use it? Does it have special value to them?” If I couldn’t answer “yes” to at least one of those questions, it didn’t go back in the room. I was absolutely shocked at how many things they had that they weren’t even using and were taking up valuable space in our not-so-big house!

If you saw my post on Monday about the updates I made to the boys’ room, you know how the room turned out, but here’s what we ended up with…

No more clutter under the bed! Yippee! All of the toys that were under there previously either found a place somewhere else or were thrown away/donated/put in the “sell” pile.

Connor and Caleb helped me go through everything that was once in this corner to decide on what they really needed and what could be discarded, and I was proud that they didn’t insist on hanging on to every little thing! We were able to narrow it down to only the things that would fit in a designated spot on this shelf, clearing the floor area so there was no more clutter.

The closet saw a big improvement too. My wedding dress is out of there and now I can easily see exactly what’s in each bin that’s left.

I weeded out all of the extra craft stuff so that the magazine rack was no longer overflowing, and I threw away all of the useless markers and crayons and was able to put back the smaller cups to hold the ones that remained.

Whew! Honestly, decluttering this room was a lot more work than I thought it would be– I didn’t realize it had gotten so bad! I learned several important things along the way, though, that I think will not only help me keep this space organized but will help me keep other areas of our home free from clutter as well:

Who knew that just decluttering the kids’ room could teach me so much?! I’m loving Operation: Declutteration already, and I can’t wait to get started on another space for next week! What space did you declutter this past week/will you declutter this coming week? If you don’t have a space in mind yet, choose one now! It doesn’t have to be an entire room– feel free to start small! Just declutter something and take those first little baby steps! See you next week!