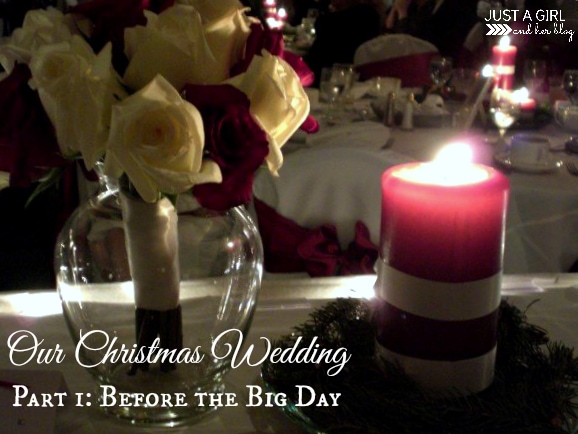 It’s almost Christmas!!! Do you know what that means? No, I’m not talking about Santa or presents. I’m not even talking about beautiful home decor or fun craft projects. Clearly Christmas is first and foremost about the birth of Jesus, but the second reason I get so excited for Christmastime is that it means it’s almost my wedding anniversary! Yes, hubby and I tied the knot two days before Christmas waaaaaaay back in 2006, and since I’ve already overloaded you with a ton of Christmas crafts and decorations the past few weeks, I thought I would take a few posts to walk down memory lane and share some of the details of our Christmas wedding. Before I get to the actual wedding day, though, I thought I would start with how we got there…

Donnie and I went to a small Christian college with a “ring by spring” reputation– meaning all of the girls and guys coupled up and got engaged by the spring of their senior year. I remember sitting in the welcome assembly the first day I arrived on campus and hearing the dean of students declare, “Look to your left. Look to your right. Your future mate might be in sight!” No pressure, right? 😉 So later that night the girls on my hall and I naturally decided that since it was expected that we would marry those boys who lived on the other side of the quad, we would have nothing to do with them. We deemed ourselves “The 20% Club,” for the 20% of students who left our college unattached. (I’m sure 80% of students being engaged is an exaggeration, but it sounded good to us.) And of course, as usually happens when you declare that you are not going to do something, most of The 20% Club did, in fact, end up marrying boys from our college. Go figure.

But how could I resist when I came across this handsome stud-muffin while at church one Sunday in the spring of my freshman year? 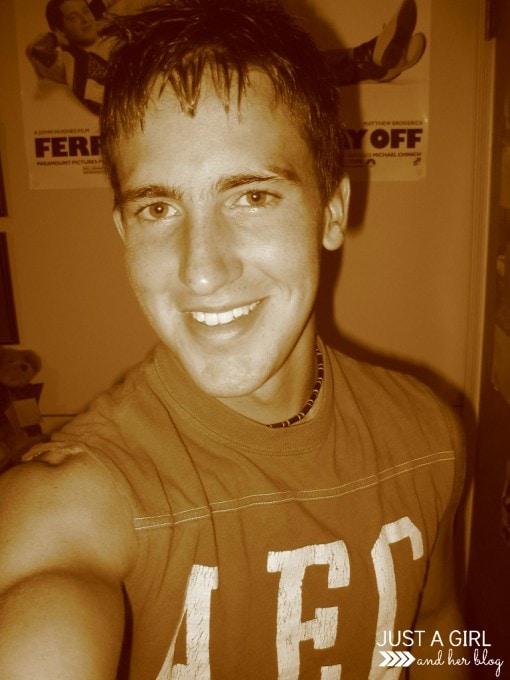 {Yes, this is when selfies were taken with an actual camera rather than a cell phone, and no, that was not what he was wearing at church when we met. 😀 }

One of my close friends had known Donnie in high school, and soon after I met him, she told me she thought we should date. “He probably doesn’t even remember who I am!” I told her. But he did, and he asked me out on a date soon after. 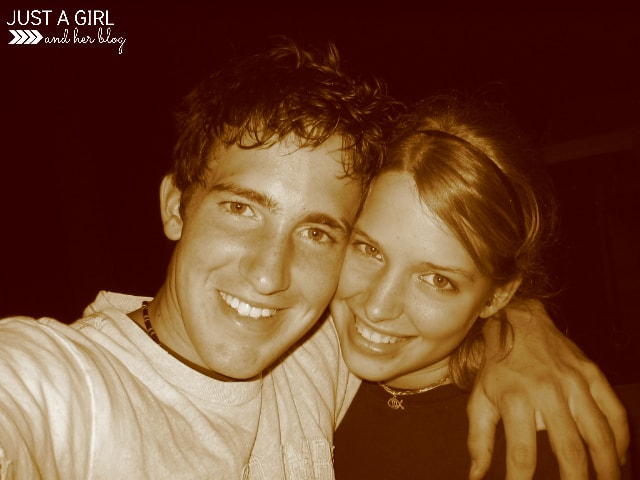 {Apparently we were also very into Sepia back then…}

On our first date everything that could go wrong, did. We happened to plan it for the same evening that we were supposed to register for classes online, and since you had to be sitting at your computer at the designated time, waiting to fight off the hoards of other students trying to register for the same classes, we ended up getting a late start. We had planned to hike around and play frisbee at a state park that was not far from our college town, but after registering and driving to our destination, it was dark by the time we got there. We walked around for a little while, but it was hard to see much in the dark and frisbee was definitely out, so we headed back to town. We tried to go to Dairy Queen for ice cream. It was closed. So we thought we might hang out in a local park right in the town. Also closed. Poor Donnie. He had planned everything out so perfectly and it just wasn’t working out. Good thing I thought that was kind of cute. 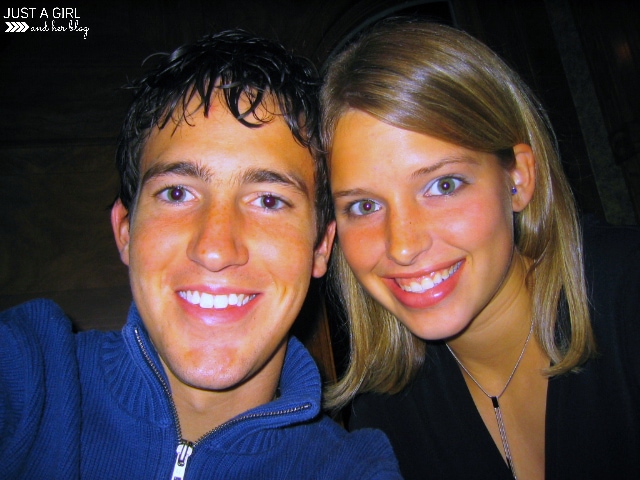 He Pops the Question

Fast-forward to the spring of our senior year. I had gone to visit Donnie at his parents’ house over Easter break to celebrate our three year anniversary of dating, or so I thought. He had planned out a whole day for us, reliving our first date– only this time, everything went right. We went to a park, hiked around {in the daylight}, and had a picnic lunch. We grabbed ice cream at a Dairy Queen that was actually open. Eventually we headed back to his parents’ house. His parents had gone out for the night, and Donnie told me to go get dressed for a nice dinner while he worked on some things downstairs. I came down fully expecting to head off to some restaurant, but I then realized that he had been cooking! {Who can resist a man who cooks?!}

D had put together a fancy salad, chicken parmesan, and even yummy dessert! We ate at a beautifully decorated table that he had set up in the sun room, surrounded by pink balloons. {which I found out later he had set up a few days before I got there and locked the room from the inside so I couldn’t go in!} At one point he got up to do something and was gone for a long time. I mean, a LONG time. {Apparently he was nervously pacing around upstairs trying not to throw up.} When he came back down, he sat down next to me, launched into the sweetest speech you’ve ever heard, and ended up down on one knee asking me to marry him. I said yes, clearly! 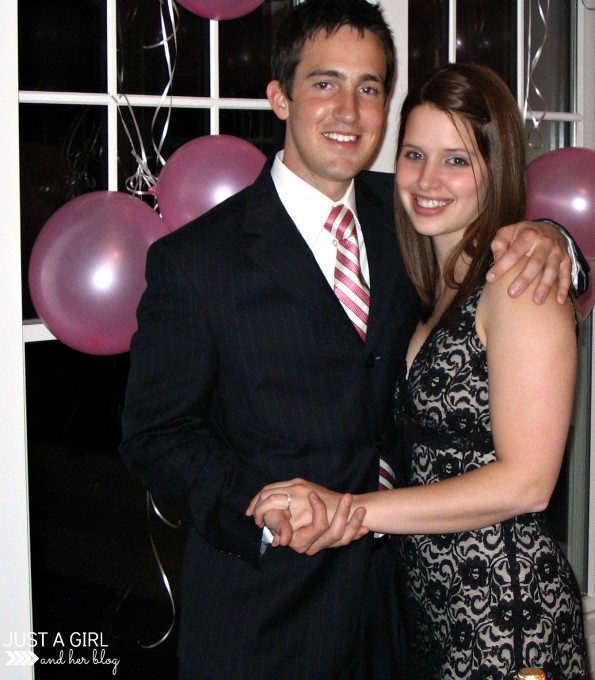 {Yes, during my college years I was having trouble deciding whether I was blonde or brunette. I have since decided on brunette. 🙂 }

We were excited to set a date, but with post-graduation plans up in the air, we weren’t sure when we could make it happen. I knew I would be teaching, so it seemed like our only options would be to get married at Christmas so we could go on our honeymoon during Christmas break, or to wait until the following summer. And I wasn’t waiting until the following summer– Christmas it was! We DIY’ed some save-the-dates and launched into planning. 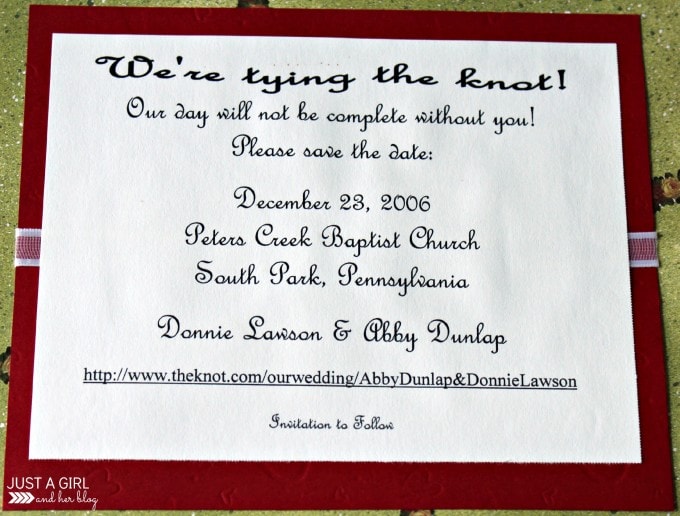 Donnie and I both got jobs in Virginia and were getting married in Pittsburgh, so most of our planning had to be done long-distance, with an incredible amount of help from our moms. (Thanks, moms!) Never in a million years did I ever think I would have a red and white Christmas wedding (I’m more of a pink in early summer kind of girl), but we did. And if you want to see it, you’re going to have to come back because the story will continue next time… 😀