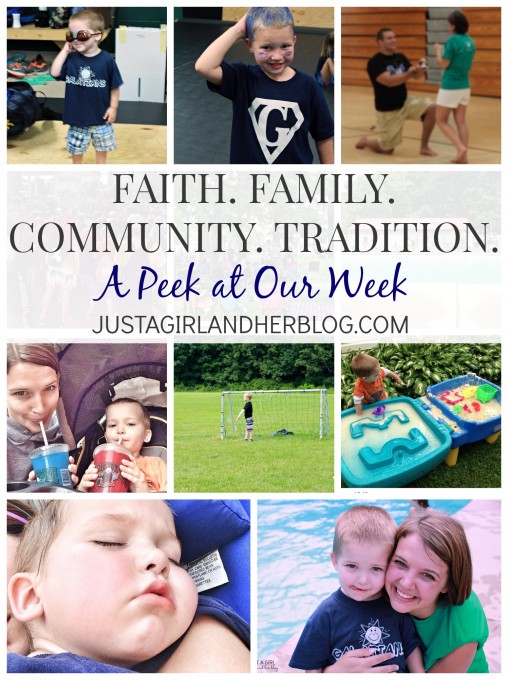 Warning: this post is completely different than what I usually write. It’s not a craft of DIY project. There aren’t any tips or tutorials. It’s just me talking about my week, about a tradition that’s been going on in my family for a long, long time now and has been a big part of my world. This is real life!

If you follow me on Instagram, you probably saw that last week was a little out of the ordinary for us. While Donnie stayed at our house so he could go to work and make some progress on our master bathroom, the Cs and I traveled to the town where I grew up and stayed with my parents so that Connor could go to their day camp for the first time. That may seem like a normal summer thing to do, and it was, but what made the week so extra special was that this was the 25th year they had run the camp. The first year, 25 years ago, I had just finished kindergarten and was one of the youngest campers there. 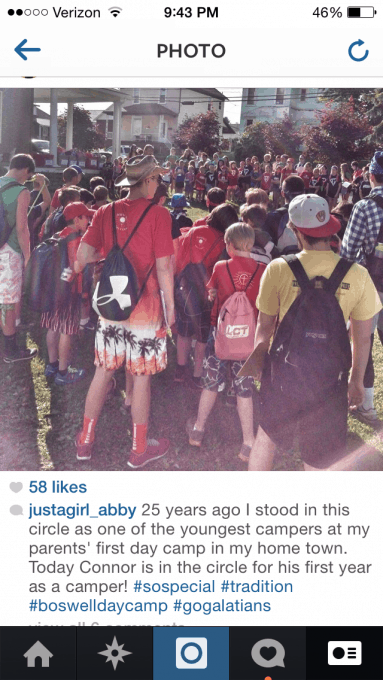 Their camp uses sports and competition to teach campers about Jesus, that He is not confined to the four walls of a church, but is with us in the midst of daily life. It is loosely based off the model of Summer’s Best Two Weeks, an overnight camp where my parents worked right after college. (And that I attended all my life!) There are two teams– the Romans (in red), and the Galatians (in blue)– and they compete against each other during the week in competitions like hockey, soccer, volleyball, and ultimate frisbee. Each camper also works toward goals in various activities (tennis, archery, canoeing, track events, etc.) that earn points for their team. 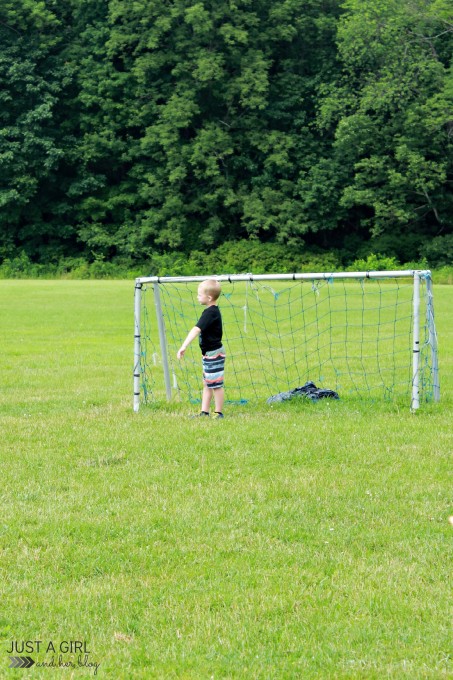 While Con was playing up a storm, Caleb and I got to hang out one-on-one for a lot of the week! He was just slightly obsessed with Grandma’s water/sand table… (What is it with little boys and messes?!) 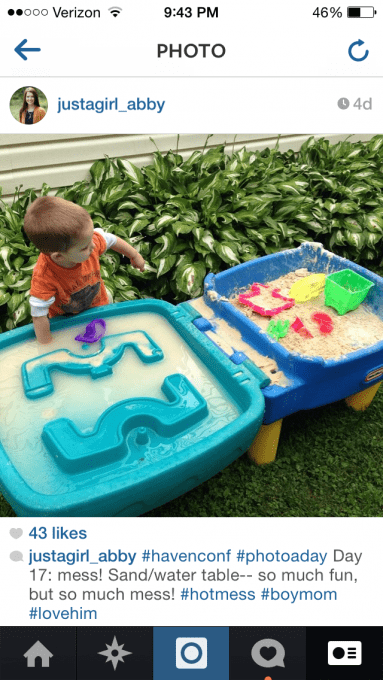 And every day we would walk down to the little store in town to grab slushies. One of the things I miss most about living in a small town is the ability to walk everywhere (and know everyone that you pass on the way there)! 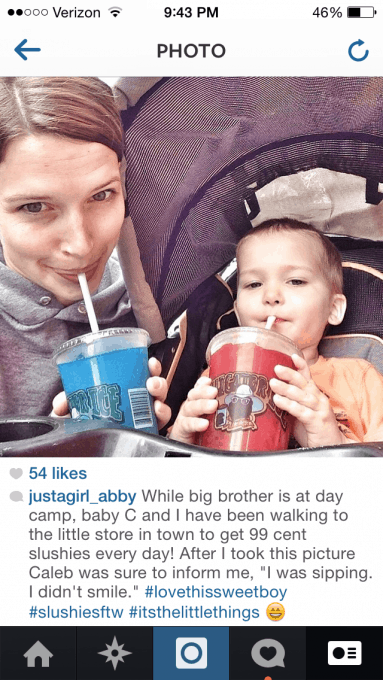 My favorite day of camp by far is the last day. The regular schedule is thrown out the window, and the campers compete in meets to earn even more points for their teams. We were fortunate to have beautiful weather for the swim meet, where Con came in third in the floatie race. He was so proud of his ribbon! 😀 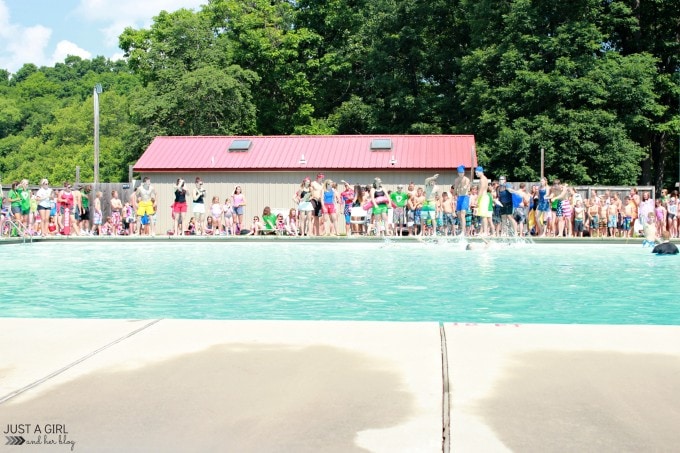 Caleb was exhausted from his busy week by this point. As soon as we sat down in a shady spot to watch the kids swim, he was out! 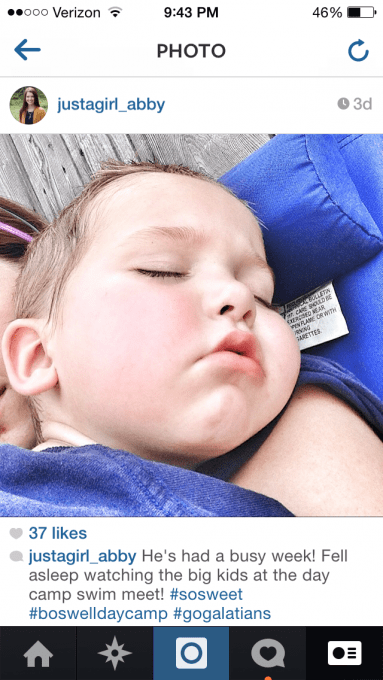 He did wake up long enough to snap a picture with his Aunt B, though… 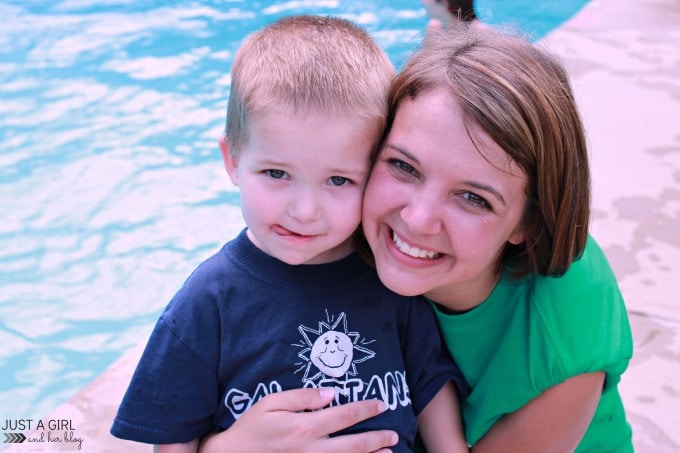 Next it was on to the wrestling meet. The campers always go all out for this one! They paint their faces, they spray their hair various colors, and almost no one has a voice at the end from cheering so hard! 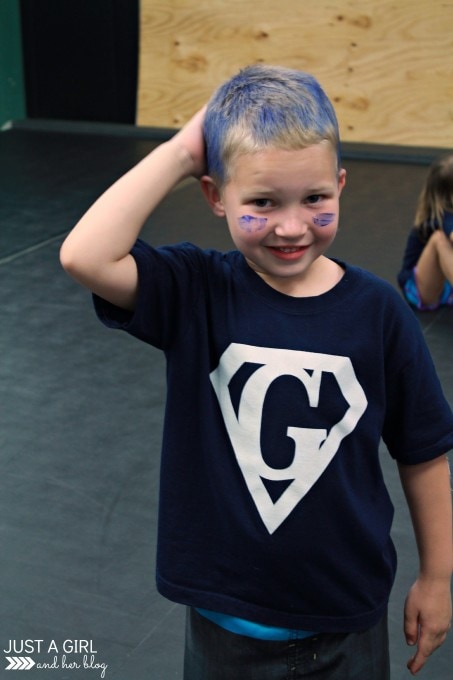 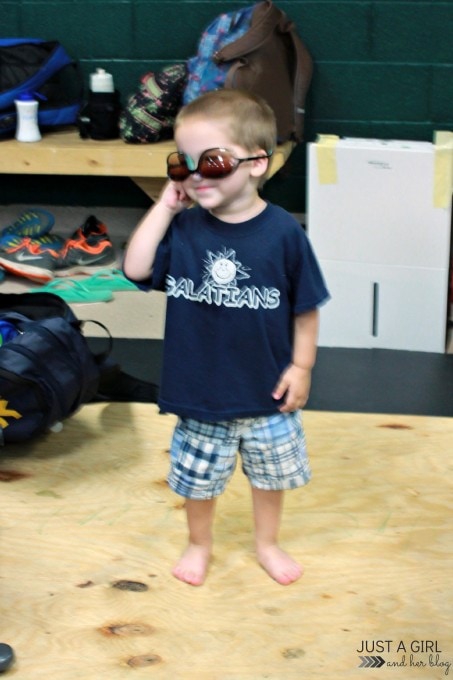 At the end of the week, the entire community is invited to a big block party, held right in the middle of town. Everyone pitches in and brings food, there are hundreds of hamburgers and hot dogs cooking on the grills, and the line for food is long, but no one minds because you’re getting to hang out with friends and family while you wait. 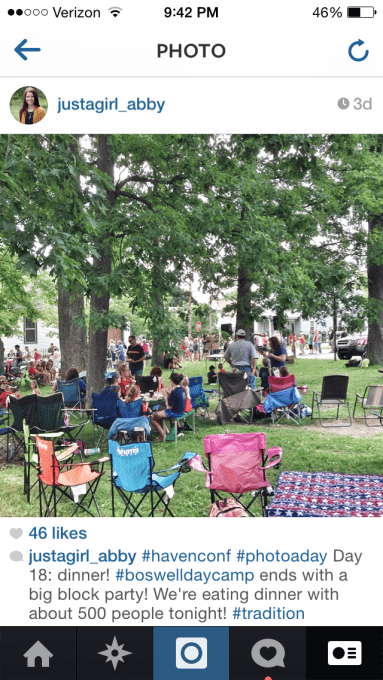 Dinner is followed by an awards ceremony where the kids are recognized for their accomplishments. The campers are always anxious for the end of the night where they find out which team has racked up the most points for the week and earns bragging rights for the year! (Con was so thrilled that his Galatians won!)

Usually once the winning team is announced, that’s it– everyone makes their way home. This year, though, camp ended with a pretty fun twist. You see, a little over a year ago, my parents hired a guy named Jon to come work with their youth ministry. It didn’t take long for he and my sister Brittany, who also works for my parents, to become interested in each other and start dating. {Can you guess where this is going?} At the end of the block party/awards ceremony, my dad announced that there was one more award to be given out, and turned it over to Jon, who, in front of all of the day camp kids, high school-aged counselors, and all of their parents and friends, delivered the most beautiful proposal you’ve ever seen. 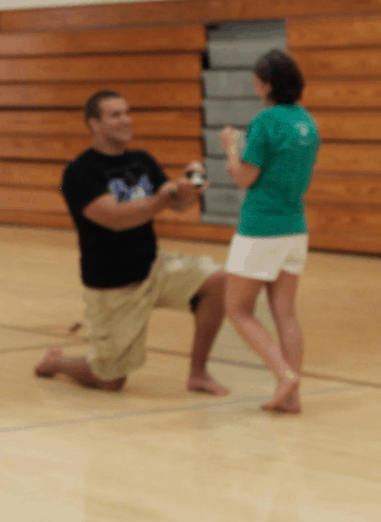 Of course she said “yes!” I could not be more thrilled for them! {And I guess you’ll probably be seeing some wedding projects on the blog over the next several months! 😉 }

What a week! If it seemed like I was slacking on social media, comments, emails, etc. last week, it’s because I was. I was totally trying to soak in every moment, and I loved getting to see Connor experience something that was such a big part of my life for so long. I loved watching younger kids and older counselors get to experience the love of Christ in a new and very real way. I loved being back “home” and enjoying small town life again. I loved watching my sister be oblivious all week as the rest of us knew she would soon be getting engaged!

I think that every once in a while it is SO good to get a break from the normal routine. I know it really helped me to weigh my priorities and get back to what’s really important. I absolutely love what I do with blogging, but it’s not everything. Last week was a really great reminder of that. My kids, husband, the rest of my family, friends, and most of all Jesus, need to come first, no matter what. Because, to quote The Hokey Pokey, “That’s what it’s all about!” 😉